A Chronological Summary of my Running Career

Coached by the former elite runner Per Halle who placed 7th in the 1972 Olympics. Per did an excellent job as a coach and steered my training into the middle distances to ensure I was “fresh” and fast enough when I would eventually move up in distances.

This is probably one of the main reasons why I could handle all the hard training later. I was “saved” as a young runner from the massive overload of mileage and with great variation in the training (also participating in soccer and handball) At the time personal bests were 1.56 in the 800 meter and top three in my 800 meter yeargroup from the age of 14 up until 17. 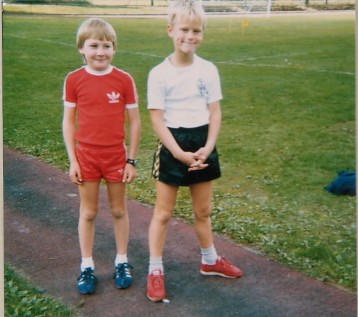 Moved to the US to York High School, the mecca of American high school running. Probably my best year of running in terms of good memories and experiences. Coached by legendary Joe Newton, a charismatic mentor and highly respected coach.

Moved up to the longer distances and ran 1.51.9 in the 800 meters that spring, together with a 8.57 2 mile (about 8.23 3000 meter). Extremely hard training- probably the hardest year of training I have ever had – showed me the road to the future. The closest you can get to Kenyan training (when they are 17) is at York and it gave me the running background I needed to run fast in the future thanks to coach Newtons principles and enthusiasm.

Participated in the European Juniors. Learned the ideas of multi-tier-training and periodization through Mr.Coe through regular contact over the phone, training programs by mail plus stays at his house in London. Hard and intense workouts, signed by one of the smartest middle distance coaches out there.

Back to the US again to Indiana University. Coach Sam Bell there recruited me with the help of Bob Kennedy, the first man under 13 minutes in the 5000 meters. Bob attended Indiana for five years and was back then coach by Sam Bell.

Long distance focus. After a misrable fall of training in 1998 and lack of motivation for the middle distances I decided together with Per Halle to try the long distances. So in January that year, the plan started – with exact copies of his workouts from his prime year of 1972. Before that my highest weeks of mileage were below 100km (except at York) and we hit over 180 km the first week and managed stayed there throughout the spring. 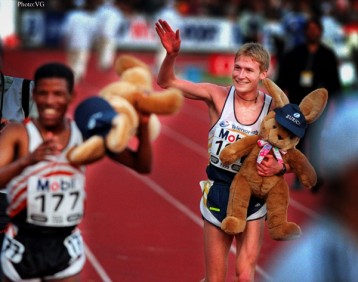 First year of altitude training, in the Eldoret area, Kenya where Frank have worked with groups of Kenyans since the beginning of the 1990s. Ran in the Sydney Olympics one of my main goals for many years.

2001 marked the most consistant season so far. Three training stays in Kenya at altitude plus summer training in StMoritz. Three Norwegian records, in the 2000,3000 and the 5000 meters. 9th at the World Championships in Edmonton.

Extreme altitude training in Bolivia (4000+ meters) plus Kenya and more high intensity work to be a factor at the 2002 European Championships. A year of learning. Rough summer, with only placing 14th at the European Champs. Long recovery fall period and continual work to get the body back on track.

Back again. To the times of 2001. Seasons opener of 13.08 in Bergen. Started working even closer with Leif Olav Alnes, the sprintcoach. His guiding helped me place the focus back again on the right things through every day of training. Qualified to the Olympics in Athens. Ran a Norwegian record in Rome of 13.06.39.

Started the season with a European Cup of 8.24 tactical race before running 13.11 in Rome for the World Champ qualifier and 13.07 in Heusden the 23rd of July. 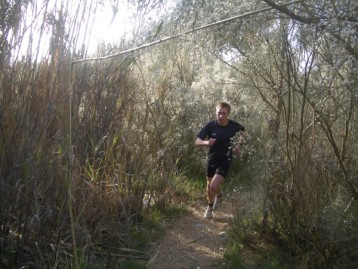