It looks great there. The stadium fits perfectly into the Oslo city picture, just like the old one. It should silence all debate that has been around building a new stadium.. 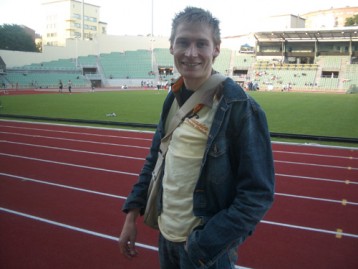 – With the stadium behind me –

As you can see, the old walls have been saved in the back – making the structure just like the old one. I spoke to one of the the top people involved in the buliding project and got some info on the process. They have kept the three aspects of the old track that made it nice to run on : 1) the special walls around the stadium, that ensures nice wind conditions – if you get wind from the north it means tailwind for 200 meters and no wind on the straightwalls. 2) the long straightways, even though the turn have been changed slightly 3)the hard track. This is probably the hardest track in Norway already, even though it is only a few weeks old.Quite rare but very good. I discussed it with the project manager and they have done a very focused job on those things – planning to make it as good fast as possible. They have something like 2 meters (!) of different layers underneath plus used some of the best people within asphalt making in Scandinavia on the last part. So feels nice. 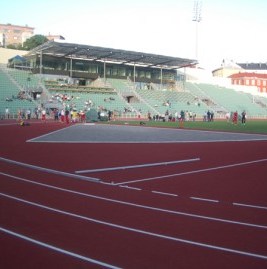 Easy training session this morning. Got stopped after 10 minutes by a doping control unit driving up next to me, so had to run the last part of the session in circles around the cinder by the top athletics center for them to watch me. Good to see they are doing their job and testing athletes when they least expect it 🙂

A bit harder work this afternoon and plenty of rest now….