About one week – half way into the altitude stay here in St Moritz. So getting a more and more steady + nice feeling up here. The other day was a 1000 meter session on the track (picture below), just to get the legs going abit.

We have been very lucky with conditions up here so far. Around 25 degrees C and no rain. It can vary quite a bit up here, and the last time I was up here I had to wear a hat for some of the runs (and that was in July..) It makes training so much easier with weather like this – and the recovery between sessions also.

Still athletes coming in here – Maria Mutola around the lake the morning. Most probably preparing for the Grand Prix races in Paris etc. For the non-European athletes this will be the main goal of the season as there is no other summer championship.

The easy runs up here are adjusted on a day to day basis  – as the pressure in training it alot higher now and you just have to adjust some of the longer runs down. A bit faster this morning, then very easy this afternoon probably together with the Mottram group. They are running the easy runs to recover (like easy runs should be..) so that fits good with the philosophy I believe in also.

Short trip to Italy the other day – over the border after a 1 hour drive. Just to get a break from training etc – to the border city  Livigno. But won’t be many of those – with training as hard as you can, you need all the rest you can. Both mentally and physically. Long rests between runs, sleeping in the afternoon and nothing strenous on the system. A good life 🙂

Well, back to the apartment  now – some rest before the evening running.

– 1000 meter repeats on the track. St Moritz in the background – 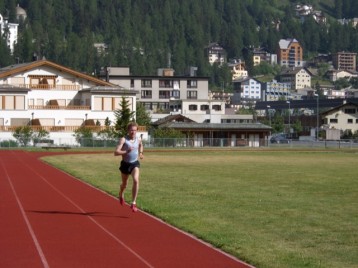 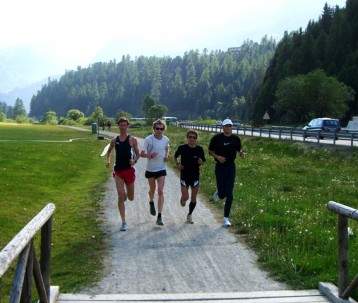